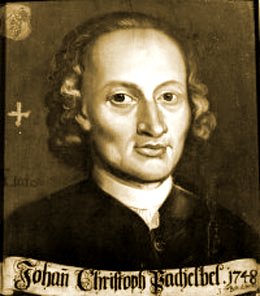 Pachelbel’s Canon is definitely one of the most famous of classic music of all times. Just think about how many weddings we have been to where has played Pachelbel’s Canon in D. But other than the music scores itself, not very much is known about Pachelbel’s most famous piece. However, I’ve probably read four different versions of the stories behind the composition of Canon, all in Chinese.

One of the most famous and legendary version goes like this: Pachelbel played piano at a British church where he travelled to during the war at his 10ish. The most beautiful girl in town Barbara fell in love with Pachelbel listening to him playing. She told Pachelbel that she wanted to learn to play piano as well so that she could spend time with him. But not after long Pachelbel found that Barbara wasn’t really into playing and told her:” Piano really isn’t your thing, you don’t really like it. Just go.” Three days later, Barbara KILLED HERSELF in the church. In that following half a year, Pachelbel found that he wasn’t as happy as when he had Barbara around. He realized that he actually loved Barbara. He started to compose a song to propose to Barbara, finished the 1/3 of that song first and then finished the rest of it during a war. Then he found out what happened to Barbara and played the Canon in front of everyone in town. And of course everyone couldn’t help but crying out loud.

I couldn’t believe that I actually thought this was the real story behind the song before I did some research in English recently. It is cheesy and disrespectful to the composer Pachelbel. But it is a story that is widely circulated and perhaps believed by a lot of people in my country since that’s why all on the Internet are about when you google:”What’s the story behind Pachelbel’s Canon?”

There are tons of other example of this kind of misinformation on Chinese websites, maybe other countries as well. Another typical one, for example, is “a famous song from Tagore “The Furtherest Distance in the World.” I bet 80% Chinese knows about these lines:

The furthest distance in the world

Is not between life and death

But when I stand in front of you

Yet you don’t know that I love you

And yes… it is not until Wednesday that I got know it is actually someone created by Chinese people their own, and they even translated English versions of it and put them online…

Well, who knows how many those fake stories are out there being read by people who have no idea about it? It’s even somehow funny to think about it. Getting data about that must be interesting